On the 4 February back in 2000, World Cancer Day was written into the Charter of Paris Against Cancer. The milestone document was signed in the French capital by the country’s President at the time, Jacques Chirac and the then UNESCO General Director, Kōichirō Matsuura.

Twenty years on and at the start of a new decade, the 20th anniversary of World Cancer Day offers an opportunity for the international cancer community to reflect and take stock of the achievements that have been made over recent years. To coincide with this milestone, we have created an interactive 20-year timeline of progress.

Data, science, knowledge, policy and understanding of cancer have come a long way since the turn of the millennium. Today in 2020, we know more about cancer than we have ever before. This increased level of awareness, knowledge and understanding is being translated into greater prevention of the disease, earlier diagnosis, more effective treatment, and ultimately more cancer survivors.

Over the past twenty years, the scientific community has built a growing body of evidence on cancer risk factors. In 2015, the International Agency for Research on Cancer (IARC) established convincing evidence of the link between the consumption of red meat and cancer.[1] A year later, IARC linked being overweight and obesity to eight new cancer sites.[2] 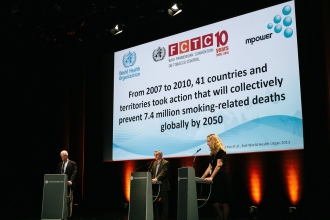 A presentation of th FCTC at the 2016 World Cancer Congress – Paris, France
(click image to zoom)

In 2003, the World Health Assembly adopted the Framework Convention on Tobacco Control (FCTC), which was put into force in 2005. Focused on protecting public health and reducing demand for tobacco, it is among the most widely adopted treaties in the United Nation’s history and is a touchstone for public health promotion.[3]

Last year, the WHO reported that 5 billion people are now living in countries that have introduced smoking bans, graphic warnings on packaging and other effective tobacco control measures - four times more people than a decade ago.

Laws to prevent cancer has significantly strengthened and advanced over the past two decades. In 2012, the McCabe Centre for Law & Cancer – the first and only centre of its kind – was founded by UICC, Cancer Council Australia and Cancer Council Victoria with the mission of “making the law work better for those affected by cancer.”[6]

Working alongside country governments, national laws continue to be amended and defended to ensure our right to health, including to reduce harm from cancer risk factors, to improve equitable access to cancer services and to provide individual financial protection from a cancer diagnosis and treatment.

In October 2018, cancer immunotherapy researchers James P. Allison and Dr. Tasuku Honjo were jointly awarded the Nobel Prize in Physiology or Medicine. Their ground-breaking research on “unleashing the immune system to attack cancer cells” has led to the development of a number of immunotherapy drugs.

The research promises “life-changing possibilities” for those diagnosed with certain types of cancers, and in particular for individuals diagnosed at an advanced stage where the chances of survival are typically lower. What’s also exciting about the application of this breakthrough research is the possibility of treating metastatic cancer, something long “been considered essentially untreatable”.[7]

Watch the moment the 2018 Medicine Laureates collect their #NobelPrize diploma and medal. pic.twitter.com/KGRwFZFOo4

Steps are being taken to even out the playing field when it comes accessing medicines and treatment across the world. In 2015, the WHO included 16 new cancer therapies on its essential medicines list and again in 2019, the WHO updated its list to include more cancer medicines.[8] This represents a critical push to ensure countries increase access to lifesaving cancer medicines.

Advancements in research and technology have taken leaping strides. In 2006, the first vaccine against the human papillomaviruses (HPV) was approved by the Food and Drug Administration. The breakthrough vaccine helps to protect against the types of viruses which are responsible for approximately 70% of cervical cancers and pre-cancerous lesions. In 2018, a Cochrane review,[9] added to the growing body of evidence that HPV vaccines are effective in protecting young women against cervical cancer. In the same year the WHO called for the global elimination of cervical cancer and Australia announced that they would eliminate the disease nationally by 2028.

To eliminate cervical cancer within our children’s lifetime: it’s an audacious goal but remarkably and realistically within our reach.

There is a global momentum of support to tackle the rising cancer crisis - a momentum created by the efforts of the international cancer community and committed countries leaders. We should be proud of the progress that have been made over the last 20 years.

Now, on the 20th anniversary of World Cancer Day, is the moment to accelerate efforts and with renewed action to close the unacceptable equity gap and to save millions of preventable cancer deaths.

View highlights of major milestones and achievements over the past 20 years by the international cancer community with the interactive World Cancer Day timeline at worldcancerday.org/progress

Find out more about World Cancer Day and join us on 4 February.