Breast cancer is the most common cancer amongst Australian women, and the second highest cause of death from cancer (3,490 deaths in 2014).[1] About 10-15% of women with breast cancer are estimated to have metastatic disease at presentation.[2] In addition, approximately one-third of cases will progress to metastatic disease despite treatment.[3] However, hospital records showed that only 5.8% of patients who were admitted to the hospital for breast cancer had a palliative care-related discharge from the hospital, indicating an overall under-utilisation of palliative care for breast cancer.[4] To increase access to information for metastatic breast cancer (MBC) patients, Palliative Care Australia (PCA) has launched a project in collaboration with Breast Cancer Network Australia (BCNA). The objective of this project is to empower women living with MBC to make informed care choices by providing them with accessible and easy to understand information on palliative care and how it can support them, their caregivers and families. Together, they successfully designed and launched the online toolkit “Living Well with Metastatic Breast Cancer”. 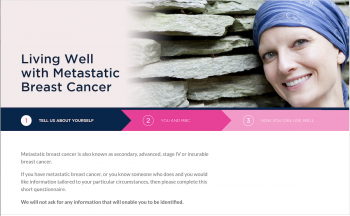 PCA was awarded a SPARC MBC Challenge grant in 2015 to implement the project “Increasing access to information for MBC patients”.

The project involved a series of patients’ consultations and the development of the online toolkit ‘Living Well with Metastatic Breast Cancer’ aimed at women living with MBC and their caregivers and families.

In addition, BCNA conducted two focus groups with a total of nine participants with MBC. This generated further quality information and supported the development of the online toolkit. Individuals with MBC were keen to contribute the project because they felt that other women like them would benefit from receiving palliative care earlier in the disease course. For example, it was clear from the focus groups that the term ‘palliative care’ was not well understood and was often distressing for people, who could potentially benefit from it.

The toolkit produced in this project is an online questionnaire that asks people a series of simple questions. For people living with MBC, it subsequently provides tailored information to help them better understand how to live well following their diagnosis. The resource also directs people to palliative care support services in their area.

The launch of the toolkit was promoted through a series of activities that helped increase Australia’s public awareness of the role that palliative care can play in supporting women and their families who face the everyday complexities of living with an incurable disease. These activities also strengthened a complementary campaign led by BCNA to ensure that the voice of women who have secondary breast cancer is not lost within the dominance of those who survive breast cancer.

The ‘Living Well with Metastatic Breast Cancer’ online toolkit was launched on World Cancer Day, February 4th, 2017 and it received over 1,400 unique views in the first four months.

Initial results were gathered after the first month. A total of 557 people completed the questionnaire, and more than half reported having MBC, of these almost two-thirds were women. The primary symptom reported was fatigue. Slightly more than a third of people experienced anxiety, depression and stress, but many experienced all three. Grief appeared to be an issue for less than a third of people.

From the data collected, PCA also provided input to the Cancer Australia guide :Finding the words: Starting a conversation when your cancer has progressed for which a direct link is included in the online toolkit. PCA also updated the palliative care section ‘Demystifying palliative care’ in BCNA’s Hope & Hurdles (Ed. 3), a resource designed for people who have been diagnosed with metastatic breast cancer. It has been developed through extensive consultation with people living with metastatic breast cancer, and those who treat and care for them.

In the first year of the project, the toolkit website has over 5,600 unique views. In the future, PCA plans to use the key findings of this project to inform messaging around early access to palliative care and perceptions about palliative care to help drive and guide future information and projects, with the aim of continuing to reduce barriers to accessing palliative care.