8 new members joined our community, such as Pancreatic Cancer Canada Foundation. Find out more and connect with our members.

We are pleased that more members are joining UICC to support and engage in our diverse activities and projects to reduce the global cancer burden.

According to the latest statistics on the top ten causes of death in Taiwan in 2018, cancer was identified as the number one cause and has been for the past 37 years with lung cancer being the deadliest cancer type. Taiwan’s 2016 report on cancer incidence showed that there were more than 13,000 new lung cancer patients every year – lung cancer has therefore been a major concern in the country. 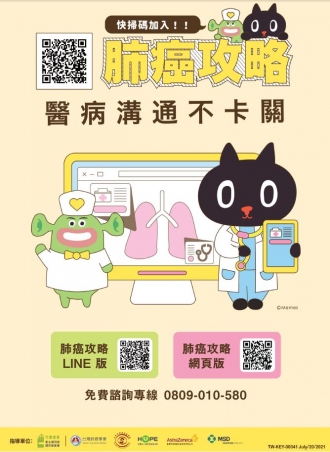 In response to Taiwan’s increasing lung cancer burden, HOPE, a long-standing UICC member, developed “Lung Cancer Treatment Walkthrough”; a patient-centred digital tool to improve lung cancer patients’ cancer knowledge and the communication with their caregivers. The tool was launched at a press conference in late July with the official support of Taiwan’s Ministry of Health and Welfare. The cat Kuroro, a very popular animation in the country, guides patients' understanding of their treatment plan, their medical options, as well as communicating them with their medical teams to discuss about the appropriate treatments. The tool’s voice function is most convenient for elderly people, since they can have access to the information by listening to it.

The “Lung Cancer Treatment Walkthrough” has been a major success since its launch earlier this year and HOPE aims at taking this digital tool forward in order to ensure timely and accurate treatment for lung cancer patients.

Zulekha Hospital’s “Pink It Now” breast cancer awareness campaign has been encouraging early detection and prevention of breast cancer in the United Arab Emirates over the past eight years and has attracted over 10,000 women to attend the screenings and consultations in its hospitals to date.

After having successfully encouraged women to access screening and consultation services, this year’s focus of the campaign lies on the incidence of breast cancer in men. According to the World Health Organization (WHO), breast cancer is the most frequent cancer amongst women, impacting 2,1 million women each year, and also causes the greatest number of cancer-related deaths. Male breast cancer is relatively rare comparing, but it is a cancer that is often diagnosed at very late stages and knowing how to screen for early signs increases the chances of early treatment.

“Having positively treated male breast cancer patients at the hospital, we felt the need to extend our awareness focus beyond the norm and ensure we also raise awareness around the early detection of breast cancer in men. When we started our campaign in 2012, we had a handful of people stepping forward to access the services provided. Today, we have touched thousands of lives. With our experience, we believe this first step will lead to greater positive changes in a few years from now,” said Co-Chairperson Zanubia Shams.

Campaign partner spokesperson, Gita Ghaemmaghami, Regional Communications Director, TikTok MENA said: “Early detection of breast cancer for both men and women is vital, which is why we are extremely proud to be partnering with Zulekha Hospital on its “Pink It Now” campaign this year. Lending our support through our TikTok platform, we are hoping to raise awareness amongst our audiences in the region to ensure as many people as possible access the free screening services. We are constantly collaborating with local private and public entities to roll out initiatives that spread positivity and informative content across the Middle East and North Africa – this partnership is another step in that direction as we support Zulekha Hospital’s team efforts to create awareness for the cause.”

Free screening at Zulekha Hospital from 1st October to 30th November. In addition to free X-Ray mammograms and consultations with general surgeons, oncologists and gynaecologists, the hospital offers 50% discounted rates on ultrasound tests if advised by the doctors. To register, call 600524442 or visit the Pink It Now website and download the application Pink Knights.

Over the last four years, the Economist Events’ series of cancer summits in Europe has articulated the challenges and opportunities in improving cancer control. In 2019 we will look to solutions. We will celebrate the successes—even if at present these are small-scale—in areas of policy, regulation, investment, partnerships, systems and technology which have led to better outcomes for patients.

As a UICC member, we are delighted to offer you a discount of 20% off the standard rate. Please use the following code: UICC/DC

Over the past ten years, the Annual International Assiut Clinical Oncology Department Conference has been considered as one of the biggest oncology conferences in the Middle East with around 600 oncologists attending and speakers from the Middle East, the United States, and Europe.

This conference will be held in partnership with the Arab Medical Association against Cancer, the Egyptian Cancer Society, Kasr Aini School of Oncology, the Egyptian Hematology Oncology Group, and the Egyptian Society for Liver Cancer, as well as endorsed by UICC.

The goal of this conference is to both bring together national and international oncologist experts to improve the knowledge on new trends and challenges in fighting various types of cancers and to build an international scientific collaborative network. As part of the 2020 edition, there will be six sessions including educational lectures and debate discussions on haematological malignancies, head and neck cancers, gastrointestinal malignancies, genitourinary cancer, and breast and lung cancers. The Assiut Clinical Oncology Department will also be organising an educational radiotherapy workshop for residents and fellows in partnership with the National Cancer Institute of Egypt.

Showing the evidence and data supporting the call for action on cancer in Universal Health Coverage, the all-new third edition of The Cancer Atlas by the American Cancer Society, the International Agency for Research on Cancer (IARC) and UICC was also launched at this year’s World Cancer Leaders' Summit. The Atlas offers a comprehensive global overview of cancer around the globe, and concludes that progress in the fight against cancer is not only possible, but achievable. Under the theme “Access Creates Progress”, this current edition draws attention to the means of tackling the cancer burden through access to information and services. The Cancer Atlas will, once again, be circulated widely with the aim to inspire all those who want to see improvements in cancer control.

We are proud to announce that since our last newsletter in September, we have welcomed an additional 8 new members in our community, for a current total of 1,159 in 171 countries. Welcome to the UICC community!

We proudly welcome the following organisations as new members of UICC:

Get to know some of our members

FUTEJE is a non-profit organisation, established in 1991, whose primary interest is focused on the implementation of prevention programmes, timely detection, as well as on the comprehensive treatment of and support for patients with limited resources suffering from colorectal and gastric cancer. In addition, FUTEJE promotes a culture of prevention and timely detection of these types of diseases by means of specific programmes. The organisation’s mission has led them to contribute to the improvement of health, poverty and underdevelopment.

Being the only NGO in Mexico dedicated to comprehensively addressing colorectal and gastric cancer, FUTEJE is driven by the values of generosity, solidarity, sensitivity and responsibility, which have been the key piece of the continuous efforts made daily. Promoting prevention and the timely detection of cancer is the organisation’s primary focus as to combat the disease.

As a founding member of the World Pancreatic Cancer Coalition and an allied partner with organisations around the globe, Pancreatic Cancer Canada (PCC) is leading the way forward in changing the outcomes for patients affected by pancreatic cancer. When the disease you are fighting has a mortality rate of 92%, there is no time for subtlety. With the launch of the Assumptions campaign (www.assumptionscanbedeadly.ca), PCC made it clear that the time for only raising sympathy has passed. PCC’s 2019/2020 digital and social media campaign is utilising the very latest in artificial intelligence to bring social brands and donors together, dramatically changing the future of fundraising. PCC directs their funding to investments in research, physician education about faster diagnosis and direct support of patients and their families.

SGMC’s vision is to offer the best private cancer care in West Africa, serving as a role model for oncology treatment, research and innovation. The Centre’s promise is that in everything they do, they will always strive to take away the burden of cancer. SGMC is a private cancer centre located in Accra, Ghana and offers radiotherapy, chemotherapy, brachytherapy and other oncology services. Their cancer treatment techniques and modern equipment give all their patients the best chance to fight cancer, to survive cancer and to improve the patients’ quality of life. The Centre is well-established in West Africa as a destination cancer centre where consultation, treatment, screening services as well as second opinions are provided. They contribute to cancer research and education, with publications and presentations in the international arena, and focus on a strong collaboration with the public sector. Ultimately, at SGMC, best practices are created that will help transform private oncology treatment in West Africa.