A tweet, 65 NGOs and the birth of the #ElCáncerEnLaAgenda initiative

Lawyer, President of Cancer Warriors of Mexico, Member of the UICC Board of Directors

Every day, I am more convinced than ever that law, public policies and politics itself can be used as effective ways to address cancer control.

On 6th June, Mexico faced the largest and most important federal and local elections in our history. More than 20,000 positions, among them 15 governors, 500 federal deputies, hundreds of local deputies, as well as mayors and councilors were up for election.

Two months earlier, on Sunday 4th April, I was reviewing some posts on Twitter and I noticed the immense number of photos and messages published by Mexican candidates who were promising to "build a better country", "improve the quality of life of Mexicans", "provide greater opportunities to citizens”, etc. But no one was talking about cancer control. Considering that Mexico has been facing a shortage of oncological treatments since 2019, something was missing in the political campaigns.

It was late, almost 10pm. However, something made me publish the following tweet: “If you are a candidate for a public position in Mexico, this message is for you: include the attention of children, men and women diagnosed with cancer on your agenda. We are tired of false promises. #CancerDoesNotWait ”. Within minutes the tweet had generated hundreds of reactions, including retweets with comments celebrating its publication as well as commitments by candidates from a variety of political parties.

I immediately told my team at Cancer Warriors de México, A.C. (Cancer Warriors of Mexico), that we had to formalise this initiative. We started thinking about hashtags and finally selected #ElCáncerEnLaAgenda, which means “cancer on the agenda”. 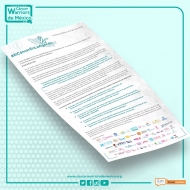 Letter signed by 65 NGOs in Mexico asking politicians to commit to including the attention of cancer patients in their campaigns.

The next day, I suggested to the Mexican NGOs members of UICC that we write a formal letter to all the candidates in Mexico, from every political party, asking them to commit to including the attention of cancer patients in their campaign proposals and work platforms. They all accepted. I then turned to other organisations and by noon that day I had brought together 50 NGOs.

The letter was signed with all our logos and published on social media. Candidates from all the political parties and all the 32 Mexican states were invited to join #ElCancerEnLaAgenda by signing a commitment letter at a digital or in-person event (respecting all health guidelines).

The letter included the following commitments:

Cancer Warriors de Mexico acquired the domain name and built the website www.elcancerenlaagenda.org to establish it as a permanent platform, where we would publicise the names of the candidates who signed the #ElCancerEnLaAgenda commitment as well as the results of the elections, not only in 2021 but beyond. We also intend to use it to monitor commitments and follow the work of elected officials (governors, deputies, mayors). Finally, the platform will enable us to share legal initiatives, public policies and other actions related to cancer control that are proposed and implemented by new stakeholders and policymakers who have adhered to our cause.

On 3rd May, we developed a video with a strong and dynamic message to the candidates and within few days it had more than 30 thousand views on Twitter. After that, on 7th May, we carried out the first event with candidates for federal positions, local deputies and mayors. It felt like the beginning of a revolutionary initiative.

After this event, candidates from all over the country asked us to hold signing events. In almost two months, we traveled to 21 states in Mexico and held almost 50 signature events with more than 300 candidates for all public positions. By that time the initiative was supported by 65 NGOs.

There are a lot of highlights, anecdotes and stories to tell but there is one that tops my list. A gubernatorial candidate in the State of Nuevo Leon signed #ElCancerEnLaAgenda and made a commitment to build the first childhood cancer public hospital in Monterrey, the State capital, with the capacity to cover the needs of the three neighboring States also.

Before election day on 6th June, we publicised the list of the more than 300 candidates who had signed our initiative. People from all over the country wrote to us saying that they would consider this list in assessing who to vote for.

Within a few days we learned the results of the election: almost 30% of the candidates who signed #ElCáncerEnLaAgenda were elected – including the candidate from Nuevo Leon who promised to build the first childhood cancer public hospital in his State! We have been in contact with him and his team in the past two weeks to set a date to lay the first stone for the building.

A tweet can create a buzz on Twitter – but passion, persistence, teamwork, heart, law and reason can move hundreds of candidates or even thousands – the next crucial decision makers – to change the reality of millions of cancer patients in the world.

#ElCancerEnLaAgenda is here to stay. My dream is that inspires other countries in the world, because although we have different languages, cultures and origins, we have a common enemy: cancer. But it is only one – and we are millions who are convinced that if we work together, we can defeat it.

Kenji Lopez-Cuevas is a Mexican lawyer with a Public Policy Master Degree. He is the Founder and President of Cancer Warriors of Mexico, an NGO focused on the defense of cancer patients' rights through the promotion of bills, law amendments, public policies and legal mechanisms in the field of health and cancer control. Additionally, he is Member of the UICC Board of Directors for the period 2020-2022. He is also Professor of Human Rights at the Universidad Iberoamericana in Mexico.